I have spent a lot of time this quarter working on bug 998863, “Asynchronous Initialization of Out-of-process Plugins.” While the bug summary is fairly self explanatory, I would like to provide some more details about why I am doing this and what kind of work it entails. I would also like to wrap up the post with an early demonstration of this feature and present some profiles to illustrate the potential performance improvement.

The reason that I am undertaking this project is because NPAPI plugin startup is our most frequent cause of jank. In fact, at the time of this writing, our Chrome Hangs telemetry is showing that 4 out of our top 10 most frequent offending call stacks are related to plugin initialization and instantiation. Furthermore, creating the plugin-container.exe child process is the #1 most frequent chrome hang offender (Note that our Chrome Hang telemetry consists entirely of Windows builds, where process creation is quite expensive).

A High-level Breakdown of NPAPI Initialization and Instantiation

The typical steps involved can be broken down as follows:

The patch that I am working on modifies steps 1 through 4 to run asynchronously. Step 5 is a special case — we asynchronously return a proxy object, but if a synchronous JS method is called on that object, we must wait for the plugin to initialize (if it has not yet done so). My hope is that if we have to call a synchronous JS method on the proxy object, plugin initialization will be far enough along that the wait will be minimal.

The following video compares two locally-built Nightlies that are identical except for the asynchronous initialization patch. After loading the browser with a page containing several embedded Flash objects, we can profile and observe the effects of this patch.

Here are links to some profiles:

This patch requires some further work on scripting and stabilization. The information in this post is subject to change. :-)

In bug 867762 I am landing I/O interpose facilities for SPS. This feature will allow main thread I/O to be displayed in the profiler UI.

There are a few components to this patch. Classes that implement the IOInterposerModule interface are responsible for hooking into an arbitrary I/O facility and calling into IOInterposer with those events.

The IOInterposer receives those events and then dispatches them to any registered observers. For the purposes of SPS there is only one observer, ProfilerIOInterposeObserver, however I wrote this keeping in mind that we may eventually want to use the I/O interpose facilities for other purposes (such as shutdown write poisioning).

For bug 867762 I have implemented two modules. NSPRInterposer hooks into NSPR file I/O and generates events whenever a PR_Read, PR_Write, or PR_Sync occurs. The second module, SQLiteInterposer, leverages the SQLite VFS that we use for telemetry to tap into reads, writes, and fsyncs generated by SQLite. In the future we expect to expand this into several additional modules. Some ideas include a module that uses Event Tracing for Windows to read events from the Windows kernel and a module that interposes calls to read, write, and fsync on Linux.

On the observer side of things, for now we simply insert a marker into the profiler timeline whenever main thread I/O is reported. Here is a sample screenshot of the markers in action (the pink stuff for readers who are unfamiliar with SPS markers): 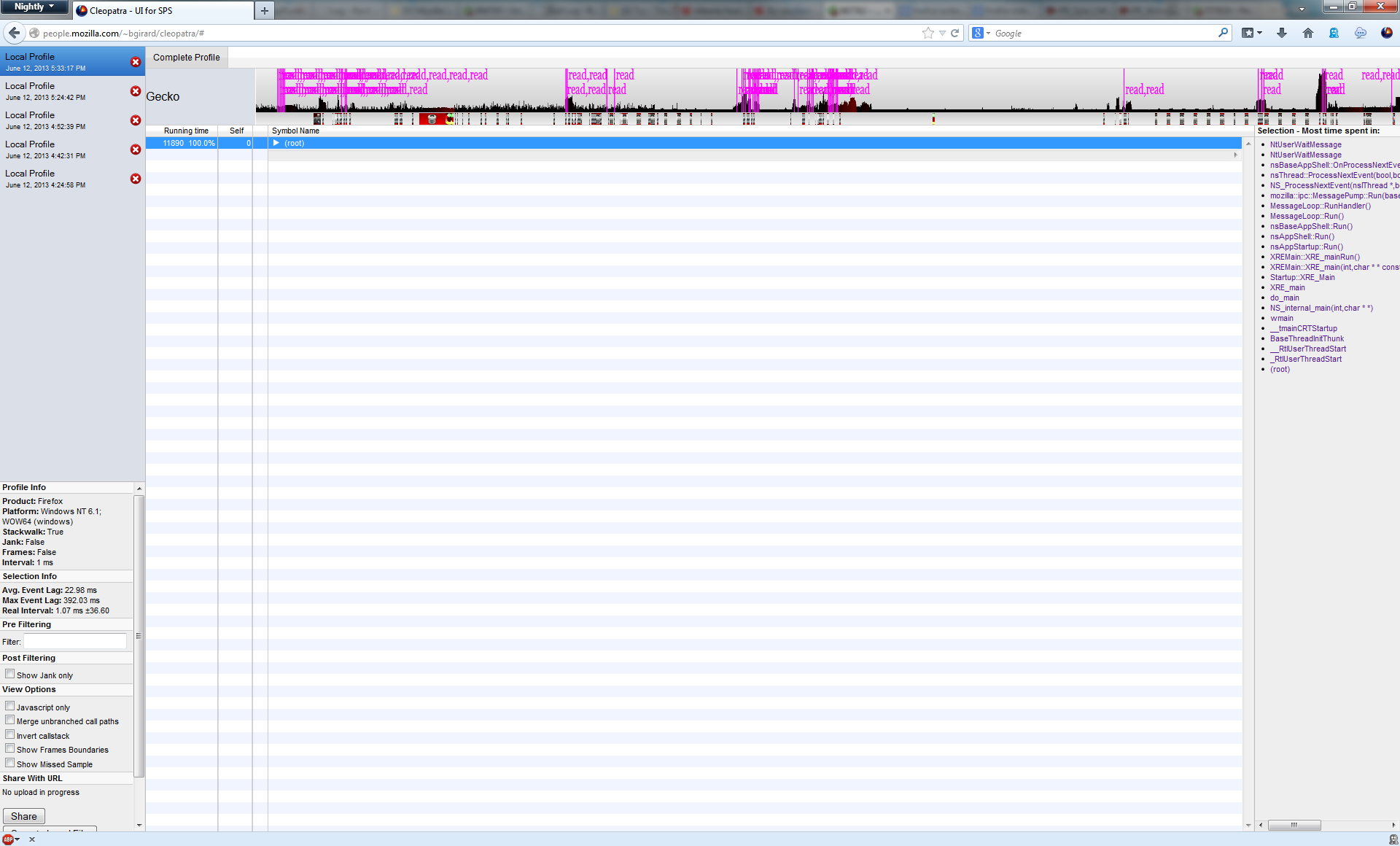 In bug 867757 (under review) this will become more sophisticated, as SPS will immediately sample the callstack of the thread whose I/O has been intercepted. This annotated stack will be inserted directly into the timeline.

There will need to be some UI changes for this to be presented in a reasonable way, but with both existing patches applied the data is already useful. By firing up Cleopatra and filtering on either NSPRInterposer or SQLiteInterposer, you can isolate and view the main thread I/O stacks: 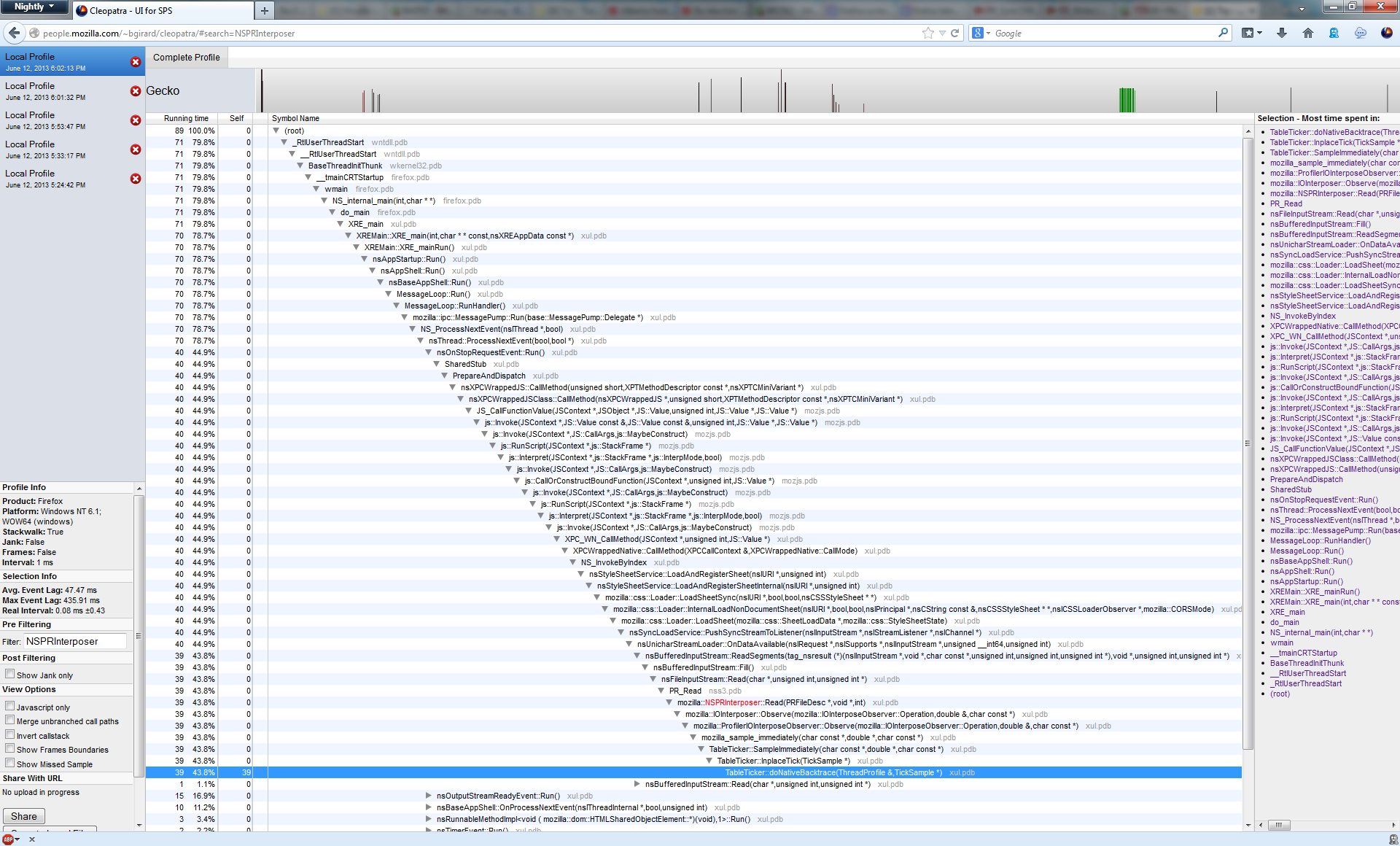 Hopefully these patches will prove to be beneficial to our efforts to eliminate main thread I/O.

The UI Has Landed

The Plugin Hang UI landed in mozilla-central in time for January’s merge. This means that it is now available on both Nightly and Aurora.

While it’s great that this code is now available to a larger audience, there are consequences to this. :-)

The first (and more pleasant) consequence is that we are now receiving telemetry about the UI’s usage patterns. This allows us to make some adjustments as the Plugin Hang UI gets closer to the release channel. As happy as I am that this feature will be putting users in the driver’s seat when dealing with hung plugins, it’s also important to not annoy users.

Initially our telemetry suggested that the Plugin Hang UI frequently appeared but then cancelled automatically because the plugin resumed execution. This indicated to us that we should increase the default value of the dom.ipc.plugins.hangUITimeoutSecs preference (bug 833560). There has also been some discussion about scaling the Hang UI threshold depending on hardware performance and user behaviour. This threshold is tricky to balance; while we want users to be able to terminate a hanging plugin, we want to provide that feature with minimal annoyance.

Another consequence of the feature landing is that we received reports from Nightly and Aurora showing that the Plugin Hang UI was inducing crashes in the browser itself. Unfortunately the only thing that the stack traces were telling us was that the browser-side code that hosts out-of-process plugins was not being cleaned up properly after forcibly terminating the plugin container. We didn’t have any steps to reproduce. What broke this mystery wide open was when our crash stats were finally able to show some correlations. I learned that nearly 50% of the crashes happened on single-core CPUs.

Once I was able to test this out for myself, the issue revealed itself in short order. Fortunately for me, even though the problem involved thread scheduling, I was still able to reproduce it in a debugger. This patch took care of the problem.

There’s a bit of nuance to what was happening with this crash. When plugin-container.exe is forcibly terminated, cleanup of the browser-facing plugin code may be executed in one of two different sequences:

Sequence 2 cannot crash if the plugin-container.exe process is terminated by the main thread. This is because PluginModuleParent::ShouldContinueFromReplyTimeout returns false in this case and the channel’s state is set to ChannelTimeout by the time that the CleanupFromTimeout work item executes. This guarantees that a full cleanup will be done by CleanupFromTimeout.

With the Plugin Hang UI, plugin-container.exe is not terminated by the main thread, so the channel’s state must be explicitly updated after termination.

The patch modifies the CleanupFromTimeout work item so that if the plugin container was terminated outside the main thread, the channel is explicitly closed with an error state. This ensures that the actors are properly cleaned up.

I filed bug 834127 when QA discovered that sometimes the Plugin Hang UI was not being displayed. I found out that Firefox was correctly spawning plugin-hang-ui.exe, however it was not showing any UI.

This lead be back down the input queue rabbit hole that I briefly discussed last time. I learned that on an intermittent basis, the Plugin Hang UI dialog box was being hung up on Win32 ShowWindow and SetFocus calls. What I did know was that my attempts to explicitly detach the Plugin Hang UI’s thread from the hung Firefox thread weren’t working as well as I would have liked.

After numerous attempts at fixing these issues, I determined that for the time being we will need to rescind the owner-owned relationship between Firefox and the Plugin Hang UI dialog. If we didn’t do so, seemingly benign actions like calling PeekMessage or passing a WM_NCLBUTTONDOWN message to DefWindowProc would be enough to bring the Plugin Hang UI to a halt. Why is this, you ask? I decided to peek into kernel mode to find out.

Recall that the guts of USER32 and GDI32 were moved into kernel mode via win32k.sys in the Windows NT 3.5 timeframe. It follows that any efforts to examine Win32 internals necessitates peering into kernel mode. I didn’t need an elaborate remote debugging setup for my purposes, so I used Sysinternals LiveKd to take a snapshot of my kernel and debug it.

My workflow was essentially as follows:

Every kernel-mode call stack that I examined on a hung thread usually ended up going through this code path:

The highlighted hexadecimal value above is a handle to a window with class MSCTFIME UI (i.e. a Microsoft IME window) that was created by the main UI thread in the hung Flash process. Despite my best efforts to try to disconnect the Plugin Hang UI input queue from these threads, Windows is insistent on sending a synchronous, inter-thread message to the IME window on the hung Flash thread. This doesn’t happen if we omit setting Firefox’s HWND as the Plugin Hang UI’s owner window.

In a multiple-window situation, Windows may move the other, inactive Firefox windows ahead of the Plugin Hang UI in the Z-order, but the window that was active when Firefox first hung does not move. I think that this is acceptable. In fact, the same behavour would be observable if we had been able to specify an owner.

If you’re interested in helping to test this feature, please install Nightly and try the repro from bug 834127. When the Plugin Hang UI fires, try to move around the Plugin Hang UI as well as the other windows on your desktop, including Firefox. If the Z-order changes differently from the way that I have observed here, please try to generate some steps to reproduce, drop me a line (aklotz on #perf or MoCo email) and let me know what’s going on. Thanks!